Home How to make an Airsoft Suppressor work?
SSniper Equipment

How to make an Airsoft Suppressor work?

Suppressors, how to use one, what’s their compatibilities and drawbacks? Special trick called a Fart Flap at the end!

What is a suppressor in real steel?

Suppressors or Silencers diminish the sound a firearm produces when firing. With real-steels, this is done by containing the gas travelling down the barrel using metal compartments.

However, that is not the case for Airsoft Suppressors. Shooting BBs doesn’t generate hot pressurized gas, rendering a need for metal compartments useless.

How do they work in airsoft?

Making a working muzzle device for airsoft requires a different approach. In essence, you need to get rid of sound waves created by the replica’s firing mechanism.

The primal function of an airsoft suppressor is to muffle regular sound waves.

Let us take the Novritsch Sniper Suppressor as an example. The suppressor’s interior is covered with acoustic foam that is used in music studios. This foam is capable of absorbing the sound and making it echo throughout the suppressor, preventing the tip to produce a loud sound, changing its signature.

Suppressors don’t work to the same extend for every type of airsoft system.

The most powerful airsoft snipers as the SSG96 are very suitable as they have a low sound signature due to the simplicity of the mechanism. Combine it with a suppressor and you have given yourself a silent combo.

Electric rifles have a louder mechanical sound caused by the gearbox (read more on AEGs). This limits the effect of an airsoft suppressor. However, it will help to change the sharp cracking sound that emanates from your muzzle to a soft popping sound that is much harder to hear and less likely to give out your general direction to the adversary.

The suppressors’ efficiency will depend on the type, whether it is blowback or not:

These are highly compatible with Airsoft Suppressors as most of the emitted sound goes through the barrel. We, therefore, advise using a suppressor with such a replica anytime possible. A great example of this is the Novritsch SSX23 line-up.

Rifles and pistols like the SSP18 have more moving parts and are less impacted by the addition of a suppressor. Adding a suppressor to a Blowback gun will however still reduce the sound coming out at the tip of the barrel to a more discrete output.

The obvious drawback of adding extra weight and length is something almost unavoidable. Some rifles allow for silencers built within the handguard. For others, a Modular Suppressor might be a solution. You can adjust it to your needs.

The other drawback to suppressors is that some airsoft players will occasionally ignore hits when they cannot hear the shot. We recommend shooting the player a second time, just to clear any doubt he may have.

Before seeing you off, here is a special trick to make your gun quieter for you, the Fart flap!

A fart flap is a thick 3 mm fabric (usually a camo tape) on the front part of your muzzle covering the exit of the barrel with a cut in the form of a cross where the BB is intended to come out.

This will not hinder the BB in any way if done well. The air pushing the bb should open the flaps enough for the bb to come out and close itself by the time the projectile has left.

We recommend using our Camo Tape to make it whilst giving it a camouflage aspect!

Here is a wonderful tutorial by Trung the Maker on how to make it yourself on the SSX23!

3 TIPS on an EFFECTIVE Ghillie Suit 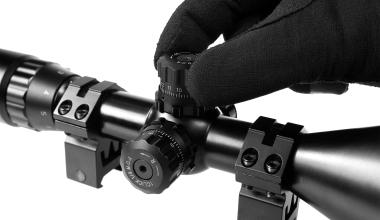 Read More
AAirsoft Beginner Guides
Here’s a simplified guide going through the basics in getting your new sight set up correctly. Installation Scopes…